Skip to main content
Submitted by Community Futures on November 19, 2008.

2008. 2001. 1994. 1987. 1981. 1974. What do all these years have in common?Need some hints?How about: Mortgage backed lending and energy fallout; September 11th , global terrorism fears and tech bubble burst; government deficits; "Black Monday"; war on inflation; oil crisis and stagflation.North America has now been hit by at least 6 major economic recessions just since I was born. Some of these periods were actually defined by economists as depressions.Each of these periods had different factors as their root causes. Some were easily identifiable, such as the energy shock in the mid 1970s while others, such as what was behind the stock market crash on Monday October 19, 1987, are still being debated.What is common, however, are how wide-reaching the impacts of economic turmoil and how irrational decisions based on emotional reactions make the situation worse.
A fundamental principle of economics is that rational decisions will be made with perfect information.Well, having perfect information is not a reality.And, for anyone to expect rational decisions to be made by humans; especially when it comes to their money is a high expectation indeed.There's a reason why "a fool and his money are soon parted." Unfortunately, during economic turmoil, the result of irrational decisions based on imperfect information is highly negative.Unfortunately, there are factions out there who try to combat the negativity through Pollyanna propaganda or through innocent misguided interpretation of facts.A recent article in a local publication provided a glaring and comical example. Was I the only one picking myself up off the floor when reading the following byline: "Alberni may escape the worst of the downturn by having avoided the upturn" WHAT THE?!That's like saying things can never be bad because they were never good; I'm not depressed because I haven't been happy; or I'm not stupid because I've never been smart. For the record, most economic indicators show the Alberni Valley made positive gains over the past 5 years.
The article goes on to list a number of activities, initiatives and opportunities available here in the Alberni Valley that may help to buffer the negative impacts of a global economic downturn. But, let's be honest here (not alarmist but honest!), there's a reason why it's called a global economic downturn – the world-wide recession caused by the credit crunch and loss of capital is impacting all parts of the world, even in communities like Port Alberni.Some of the signs are very real and obvious: continued increases in real estate prices have slowed and it's getting more difficult for people to find investors for their business expansion. Much of this has to do with the loss of capital in peoples' investment portfolios which leave them with much less money to reinvest in property or businesses. It's also much more difficult for people in other markets to sell their homes to move here and our relatively affordable market.
Other impacts are not so obvious.Many charitable foundations that are the lifeblood for many community groups, organizations and service providers are no longer able to respond as favorably to funding applications as many of these groups have become accustomed. Basically, these funding organizations invest their endowments in various investments and financial instruments and rely on the earnings to provide funding to other groups.So, even the smallest local community group is suffering collateral damage.
What about lower fuel prices and Canadian currency rates?Those may be mitigating factors that will, especially, help attract more domestic tourist traffic.However, if the greater global market, upon which we must rely to continue our exponential growth in this industry, has reduced discretionary income then our expectations must be more reasonable. The focus necessarily becomes attracting a greater share of the local and regional "staycationers" as well as leveraging our propitious niche of competitive and comparative advantages. Simply saying "come here because we have nature and our dollar is 18% cheaper than it was last year" is not enough.
So, just what should we all do about the economic downturn?Whose side of the story should we believe? Can we do anything at all? Can we believe anything at all?If we can at all think clearly about our own personal situations and act rationally I think we all have a positive role to play. Residents and businesses in the Alberni Valley have proven their strength and resilience year over year as we've watched the ongoing downturns in the resource sectors.I've talked to some proud oldtimers who boast that "the world ain't seen nothin'" compared to this community.It's important for all of us to do what's best for our families. We all need to assess our short and long term situations and live within our own means and invest in our future.Maybe this means not charging as much on our credit cards this Christmas. But, whatever we do buy, I encourage you to think about how your purchases can benefit your family and your community – take a good look at the entire value exchange of every transaction.
Continue to stick to your financial plan.If you don't have one then now is a good time to seek professional advice and make one. Times of economic turmoil are also times of great learning and opportunity.All indications are that this economic turmoil may last longer and cut deeper than any in recent memory.However, that was written in 2001, 1994, 1987, 1981 and 1974.I recently read articles that the financial markets and employment figures are at their lowest points in some 20 months.Well, 20 months ago we were all feeling pretty good about the world.I acknowledge that period followed months of upswing. But, we all know that what goes up must come down. And, economic history and fundamentals prove that what goes down creates opportunity for upswings yet again.It's just a matter of keeping everything in perspective and keeping yourself and others in check.Things are never as bad as them seem. Things are never as good as you want to believe…unless, of course, you live on a deserted island. 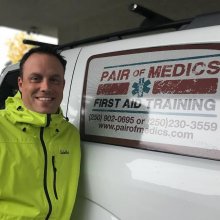